What Our Israeli and Palestinian Young Adults Value Most.

What do s’mores, crash landings and “values auctions” have to do with reconciliation and the endeavor for peace? During October, Musalaha took thirteen young adults from Israel-Palestine away camping for a weekend to get back to nature (and learn how to pitch a tent!), engage with Musalaha’s new addition to the reconciliation model, Freedom of Religion or Belief, and to spend some quality time together before launching back into university or work.

As well as an obvious highlight being the top-class camping food, including s’mores roasted to gooey perfection over the BBQ, the young adults had a blast getting to know new friends, catching up with old ones, swimming and competing in the ‘camp games championship’ for the illustrious prize of an Aero chocolate bar. The weekend was certainly filled with a lot of laughter!

We learnt from the wisdom of our young adults as they led two morning devotions, one on the story of Esther that challenged us to think about our own circles of influence and how we can extend God’s Kingdom through them, and one about the intersection of religion and politics as followers of Jesus.

During the weekend we also took the opportunity to unpack Musalaha’s most recent addition to the reconciliation model, Freedom of Religion or Belief (FoRB), which had a profound impact on many of the campers. Hedva, a Musalaha Project Manager, read through the new chapter on FoRB from Musalaha’s curriculum and shared some of the key findings from the PEW Research Center’s recent report on the increasing restrictions on religion both in Israel-Palestine and around the world.

“I learned that 70% of people in the world don’t get to experience Freedom of Religion or Belief, which is something that shocked me,” said one young adult, Saleh. “It made me think about it in terms of how we should approach other people, knowing that they might not have the opportunity to practice their religion freely. I think Musalaha is doing amazing work in this area and that a lot more people should focus on how to approach others who don’t have similar backgrounds or similar cultures and pursue peace together. I really think this message is important and should be delivered to everyone,” he said.

Hedva then led an exercise about FoRB where the young adults were told to imagine they were a group of strangers from different religious backgrounds on a flight that had crash-landed onto a deserted island. The goal of the exercise was to create a new society, to make rules and find ways to live together with all of their differences.

On the final morning of the trip, the young adults played a game where they decided which values mattered most to them by drawing values out of their favorite proverbs or sayings, and then auctioning them off one by one. Love and devotion to God came in first place! The campers were challenged to think about how they’ll live out love and devotion to God in their communities or in the pursuit of Freedom of Religion for their ‘neighbor’ on their return home. 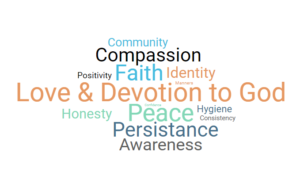 As a new intern at Musalaha, what stood out most to me from the Young Adults Camping Trip was the power that faith in Jesus and genuine friendships have within intractable conflict. Prior to my arriving in the Holy Land, the news media had painted a picture that Israelis and Palestinians were sworn enemies and that peace between them was almost impossible to grasp. However, moments on this camping trip like witnessing an Israeli Jew joking and sharing life with a Palestinian university student reminded me of the power we have to break barriers and create change. Even though the landscape here for reconciliation is changing with the rise in religious restrictions, together, we can learn how to navigate it and continue to bring peace.